She said "GET IN THE CAR, LOSER! I know you're not up to anything this summer, I've got the Sword of Fate, and there's an ancient evil that needs to be sealed away."

Everyone knows the story of how the great hero of legend Agi of Roses fought the Machine Devil and used the Sword of Fate to seal him away for a thousand years. Now, hateful Machine Devil cultist edgelords are spreading terror in order to summon him again, and the Divine Order that rules over our world claims that fighting them before it's too late would be "just as bad as them."

That's bullshit, and that's why three young attendees of the local Academy of Order and one renegade angel from the Divine Order are heading off on a road trip to take the fight to the Machine Devil and his cultists. Will you succeed in your mission to save the world for another thousand years and hit every diner along the road on the way, or will you just be a useless gay disaster?

A lesbian road trip RPG by the co-creator of Ladykiller in a Bind about fighting for love and justice in the face of indifference, and "discovering yourself," whatever the fuck that means.

Sam Anon
Battle Specialty: Support/Ravage
she/her
The protagonist of the story, your new goth girlfriend, and the titular loser. She has no idea how she got roped into this trip (it's because she is a lesbian disaster who would do anything a pretty girl told her to) but is going to try her best anyway. The healer of the party. Catch her hollering at the Machine Devil about how the void belongs to everyone.

Grace Morningstar
Battle Specialty: Exploit/Destruction
she/her
Solid A student/queen bitch of the Academy, and the current wielder of the Sword of Fate (100% stolen). She fights for what's right and isn't afraid to drop some BIG DAMAGE to back that up. You should be excited and grateful to have had the chance to have admired her before she becomes the new hero of legend renowned throughout the land.

Valentin Vaillante
Battle Specialty: Exploit/Tank
they/them
Grace's cool boyfriend who actually knows how to drive. A former TA at the Academy of Order, currently taking a break to spend the summer smiling in the face of danger. Normally quiet and reserved, but is capable of projecting when it's time to tank in battle for the entire team... or when they come up with a dumb joke.

Angela
Battle Specialty: Exploit/Ravage
she/her
She big. The Thirty-Second Arm of the Divine Order and an actual literal angel, who has decided she can no longer idly stand by like the rest of the order. She's not sure if it's possible for a being operating on her plane of existence to truly relate to humans, but it seems like it would be fun to try. A completely average fighter by intent, since it would disrupt the divine cosmology if she ever unleashed her true power while fighting alongside mortals, even against the Machine Devil.

SEPTEMBER 2021
Want an email when the game comes out? Sign up here!

Content note: Get in the Car, Loser! is first and foremost a fun adventure story about self-discovery and triumphing over evil in the face of cosmic indifference. But it's also about fighting a reactionary death cult that's sexist, homophobic, racist, transphobic, including domestic abusers and murderers. Sam will have to face evil on her journey, but she will also have to confront her own internal gender anxieties and self-image doubt. There's nothing wrong with stepping back from a fight until you're emotionally prepared for it.

I still remember playing this at PAX in 2019. Looking forward to its release!

hi!! super excited for this game! i was wondering if this game has any parts that require manual dexterity, like timing or platforming or stuff, in terms of accessibility? thanks for yr time, have a great day! :)

I am too gay to wait for this game.

I love Valentin and I want to be them

Yes, I know the game is not out yet.

so pumped for this game!!!!

please. i need this. i have waited so long

vibrating with disastrous sapphic energy in anticipation for this game

the bullet point says “Girls. Just... girls... you know...???” does this mean Val identifies as a girl (they’re described as a boyfriend), or are you just being unintentionally cis-normative?

No, Valentin is not a girl. They’re non-binary!

so excited for this!

is this still coming

It's still in development, but we're very far along—it'll be out later this year!

Thanks for letting me know, im so pumped for the release!

The description for Angela has me curious from a game-design perspective – does "a completely average fighter by intent" mean (assuming generic JRPG-type combat mechanics):

- She's got less defense than the sturdy party members and more than the fragile ones, vice-versa for offense, and mechanically works in basically the same way as the other characters just with middle-of-the-road set of starting numbers and abilities?

- Instead of normal stat gains by levels/gear/whatever, she's always got her stats at exactly the average of the rest of the party?

- Purely narrative, and she's actually just as specialized as everyone else?

All the progression in the game is equipment-based! So stats-wise she's just locked to whatever items are available at that point in the game. However, her battle abilities are well-rounded by design, as opposed to being specialized—she's the only character who doesn't have any unique abilities, but she's also the only character who can both build the stagger bar _and_ exploit it.

Ah, okay. Option one, more or less; that makes sense. i don't know what the "stagger bar is" beyond reasonably inferences, but that sounds pretty neat.

I was just thinking in terms of "she's deliberately pulling her punches to stay average, so maybe that means she doesn't gain power like the other characters who presumably can't just decide to hit twice as hard if they feel like it." Speculation getting ahead of facts.

This disaster lesbian is excite af

Looks great, as ever! 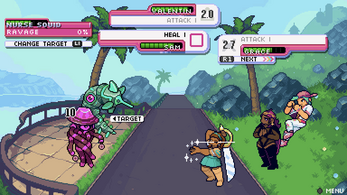 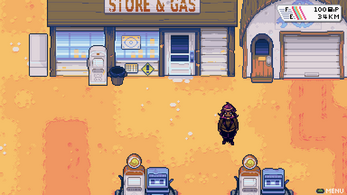 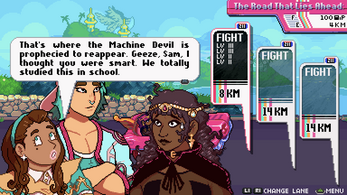 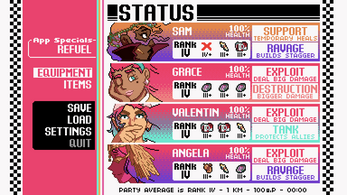 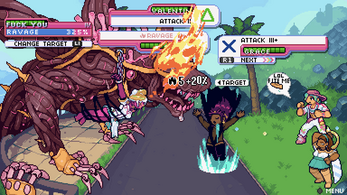 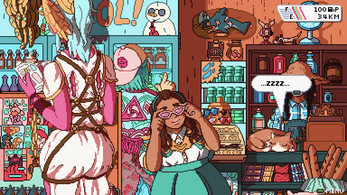 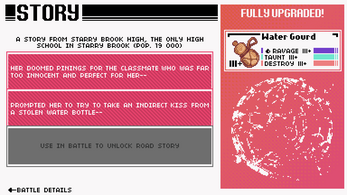 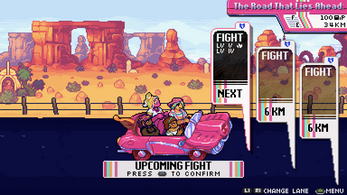